8 minutes ago
I cried out loud after reading this story and thinking of the monstrous fraud negligence and pure evil I have been subjected to at the dirty hands of#WyndhamWorldWide and their criminal doctors lawyers and insurance company and their incompetent management and the others…#WorkComp Staff, Info officers, Judges…and incompetent attorneys I retained and doctors without guts to help me. The medical and financial terrorism and verbal abuse from the unindicted fraud of 3 doctors who derive primary income with false reports on behalf of the insurance industry in order to deny medical care to me…and how many others like me???#AmericansMaimingAndKillingAmericansForProfit #WyndhamWorldWide et al #WorkComp #injuredworkersI am happy for the lady in this story and that she saw competent doctors and got and continues to get good medical care. If you know someone with a #TBI. ..help them know there is help from legitimate doctors. If you’re injured on the job find a competent brain injury attorney. ..not idiots who think a brain injury is like a broken finger. 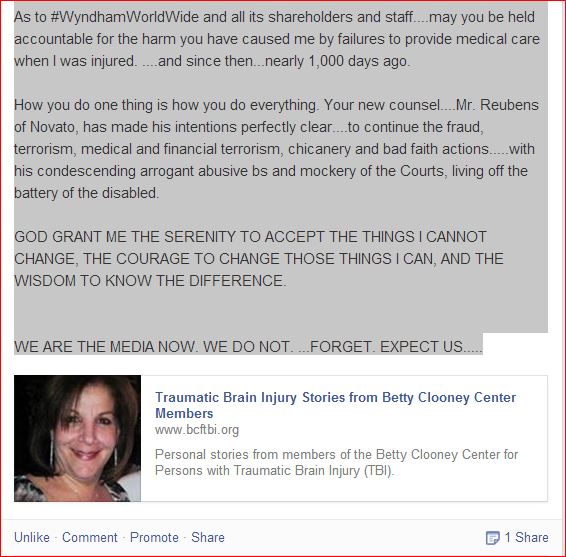 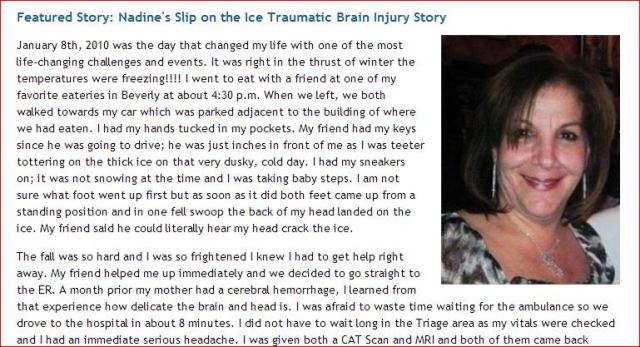 As to #WyndhamWorldWide and all its shareholders and staff….may you be held accountable for the harm you have caused me by failures to provide medical care when I was injured. ….and since then…nearly 1,000 days ago.

How you do one thing is how you do everything. Your new counsel….Mr. Reubens of Novato, has made his intentions perfectly clear….to continue the fraud, terrorism, medical and financial terrorism, chicanery and bad faith actions…..with his condescending arrogant abusive bs and mockery of the Courts, living off the battery of the disabled.

MY STORY IS HERE:  https://askaboutworkerscompgravytrains.com/list-of-posts-ask-about-workers-comp-gravy-trains/

DATE OF INJURY 1/9/12…. and Wyndham and it’s agents continue to fail to authorize medical treatments, and continue the battery and false allegations of a prior head injury, moving the stated date of injury to 2012, using medical reports of 2012 to falsely allege “pre-existing condition”…. One of their doctors even stated that ‘if there was any evidence of a slip and fall head injury, of course medical care would be absolutely necessary.  The defense lawyer coached that doctor in revising his 3 supplement reports to  a seriously skewed fabrication of opinings, based on no medical evidence, and with several perjurous statements, and even coached him in how to violate Article XIV of the California constitution by continuing to use the false reports in further evaluations, asking doctors to ‘consider’ but do not summarize, as the ‘psychological condition’ of the injured worker is tooo fragile.

#MOFO Alert, Alert.   Been called many things, but fragile ain’t one.  Since the #TBI, my tolerance for injustice and psychopaths went out the window.

Sadly, the WCAB Court at Riverside does not hear accusations of Fraud in their Courtroom, and it’s apparently for the injured worker….the brain injured worker….to find a government agency that will address the fraud.  The information and assistance office has done nothing but provide false directions, ADA violations, other discrimination actions in violation of the 14th Amendment and ADA, and now Wyndham is attempting to have the Judge ‘COMPEL’ participation in another Orthopedic Evaluation, in order for the defense “to defend against” providing medical treatment for a torn rotator cuff that their doctor recommended surgery for, after it was discovered when physical therapy was finally authorized for 6 treatments approximately 15 months after the injury.  AND THE CRIMINAL CONDUCT GOES ON AND ON AND ON…………………THANKS WYNDHAM!

Typed but not edited…… Cognitive and Vision Therapy also denied, although recommended and requested repeatedly since April 2012…. as the work comp insurance company owned neurologists say, ‘no medical treatment for brain injuries for people over 35; corrected vision is 20/20, nothing more to see here……..take an over the counter analgesic and stay away from unprotected heights, and quit bothering us with medical evidence and facts or we’ll sue you for harassment; we don’t care if you represent yourself in pro-per; we take orders from the defense counsel; it’s not personal, it’s just business….bla bla bla….’

GOD GRANT ME THE SERENITY TO ACCEPT THE THINGS I CANNOT CHANGE, THE COURAGE TO CHANGE THOSE THINGS I CAN, AND THE WISDOM TO KNOW THE DIFFERENCE.

One reply on “I CRIED OUT LOUD…. #WorkCompCrimes by #WyndhamWorldwide and it’s Agents….”