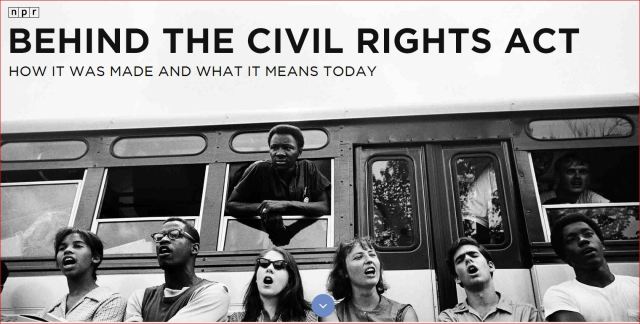 WE ARE THE MEDIA  NOW.

“BEHIND THE #CivilRightsAct
HOW IT WAS MADE AND WHAT IT MEANS TODAY”
http://apps.npr.org/behind-the-civil-rights-act/#/annotations

CIVIL RIGHTS ACT…. CLASS ACTION REQUIRED REGARDING WORK COMP? WILL THE DEPARTMENT OF LABOR and THE DEPARTMENT OF JUSTICE HELP INJURED WORKERS IN AMERICA to celebrate the  50th anniversary of the Civil Rights Act??

.
“…The struggle leading up to the act’s passage was about more than simply ending discrimination. It was about ending economic injustice and fighting for fair and equal access to good jobs and decent wages…..”

Ask about CORPORATE #WorkCompFraud and the Maimings and Killings of #InjuredWorkers in America today by Americans!    https://www.facebook.com/AskAboutWorkersCompGravyTrains

We shall overcome, incite proper trials, and fill the gallows!  Work Comp:  Americans maiming and killing injured Americans for profit. Stop it now!

[a friend, A RETIRE NURSE, helped organize these facts, without the emotional ‘charge’ around them.]

NO HEAD INJURY IS TOO SEVERE TO DESPAIR OF,
NOR TOO TRIVIAL TO IGNORE
-HIPPOCRATES 400 BCE

A witnessed slip and fall with loss of consciousness at work.  Able to stand with assistance.  Complained of feeling “dazed and confused”.  Also, c/o headache and pain in back of head, neck, back and right ankle.  Was neither advised nor offered a ride to seek medical treatment by sales manager who had witnessed the fall and assisted with getting up off the snow covered ground.

She continued with “usual work” (sales meeting followed by sales presentation) with above symptoms, including severe confusion, until approximately 10 am, when administrative manager approached with work comp form stating “you can see any doctor that takes work comp insurance”even though the form had no insurance information on it.  Again, she was not offered a ride to the Emergency Room nor was she advised to seek immediate medical treatment.  She continued with above S/S, including confusion and dizziness.  She left work at approximately 2 pm, (approximately 6 hours post fall) with her manager’s knowledge of an approximate 1 hour drive home – 20 miles down steep snowy mountain road, 40 miles of flat desert road.

She continued with headache, confusion, dizziness, head, neck back and right ankle pain.  She drove directly to the chiropractor who had been seeing her periodically (every 1-2 months) for maintenance.  Upon arrival, the office staff commented on her state of confusion and general “dazed” appearance.  She informed the chiropractor about the slip and fall at work, her LOC and immediate and persistent pain, headache, confusion and dizziness.

1-11-12 injured worker presented self to Avalon Urgent Care due to increase in confusion  and pain and headaches.  (See 1st Report of Occupational Injury).

Injured worker was not contacted by employer for follow up.  Not given a list of MPN authorized providers.

Was given an incomplete Work Comp form filled out by employer.  Personal health insurance (CIGNA) billed for Work Comp by Avalon Urgent care due to lack of infomration on Work Comp DWC-1 form.  Attempted authorization by Urgent Care.  No response from emkployer or Work Comp Insurance.  Injured worker had to pay out of pocket for co-pay and medical tests including Xrays (request for MRI).  This office was not a member of alleged MPN at the teime, but apparently later became a member.

On 1-11-12 injured worker contacted EAP provided by employer due to continued confusion and concern thereof.  Continued lack of support by employer.  She continued to update employer  No authorization for medical treatment.

On 1-13-12, Injured worker was seen by Dr. Daniel DeGoede, Clinical Psychologist,  referred by employer EAP (Employee Assistance Program).  See handwritten referral dated 1/13/12 from Dr. DeGoede  to Dr. Esmael Sebti, Neurologist for scheduled appointment on 2/7/12.  Was refused evaluation and referral when appearing for appointment by Dr. Sepbti due to non acceptance of work comp patients.  It was later discovered that this doctor’s two offices were a part of the alleged MPN network.

On 1-21-12 Retained attorney due to lack of medical treatment and appropriate authorizatin for treatment of head injury and was scheduled for an appointment on the next day by the law office with an Orthopedic Surgeon. Dismissed law firm with cause shortly thereafter, at the recommendation of a retired Judge, and worked directly, in-pro-per,  with Adjuster to coordinate a team of providers, with Dr. DeGoede, Clinical Psychologist as lead doctor and designated PTP.

On 2-4-12, sustained further injuries after two falls at home from LOC due to head injury on 1-9-12 with undetermined periods of loss of consciousness, suspected to be less than 30 minutes each, but unknown.  (See attached Hi-Desert Hospital ER report of Dr. Lambros, NO EEG DONE.

On 2-6-12  MRI Brain (one month post initial injury, 2 days post subsequent 2-4-12 injuries).  MRI not authorized by WorkComp Carrier even though it was recommended by 1st treating doctor in Urgent Care prior to subsequent fall on 2-4-12.   The MRI WAS authorized by employee health care provider, CIGNA, with a large co-pay due at time of MRI.

On 3-6-12, was referred by office of Dr. Kang  to Dr. Stephen Waldman, Neurologist  (2 hour drive from home; non-MPN provider, no TBI expertise; field of expertise epilepsy and fybromyalgia)  after several failed attempts to find a neurologist on the alleged MPN list.   Without medical evidence, Dr. Waldman recommended ‘precautionary epilepsy medications with mood elevator’ and attempted to have driver’s license revoked for decline of offer of unfounded medications.  A second neurologist was requested, but denied by carrier.

In March 2012, was referred to another  attorney, who was retained until November 2012 .

On 4-23-12, was then referred, again by another attorney, to a clinical psychologist, Dr. Marcel Ponton, in Pasadena (3 hours from home) who’s colleague, Dr. Gunn, re-administered a similar battery of neuro-psychological tests and recommendations for further treatment and evaluations were ignored by insurance carrier and in fact, TTD benefits were terminated on 4/30/12 in bad-faith action by carrier.

‘…recommend this patient be monitored neurologically in light of the above-noted cognitive issues; patient will benefit from a neurologist with experience int he treatment of traumatic brain injury; … recommend patient continue with individual therapy to help develop better insight into her functioning and increase her coping skills, and minimize external stressor;… supportive individual psychotherapy will help her develop strategies to help her…;  recommend she receive speech therapy to directly address her current difficulties with communication, including verbal fluency, as well as attentional issues…; recommend she is evaluated and monitored by a neuro-ophthalmologist to assess her ongoing and longstanding complaints of impaired vision, and explore vision therapy…; she may also benefit from occupational therapy to address ongoing visual concerns; this treatment should also address how to best compensate for situations that would be most relevant for her return to work in the future; …defer to her treating physician for her physical therapies; she should be re-evaluated in six months following her treatment regimen to assess her permanent and stationary status….’

ALL IN ALL, TO DATE, INJURED WORKER HAS SEEN:

34 specialists, and has had 2 MRI of the head, one of the Cervical Neck, and one of the Right Shoulder.  Several of the doctors were referred by attorneys, her legal representation or by treating doctors.

Retained and dismissed 4 attorneys due to incompatible goals; Injured worker has been represented approximately 14 months out of the 2 years 5 months since date of injury.   Each attorney did increasingly greater harm compounded by further failures to facilitate medical treatment than prior representatives.

The most care/evaluations were authorized when injured worker was in-pro-per after dismissing law firm #1. (Treatment with Dr. DeGoede, Dr. Kang and Dr. Whitlock Jan-Apr, 2012)

Due to brain injuries, and consequent communication and cognitive deficits, injured worker has been unsuccessful in retaining competent legal representation, knowledgeable about proper handling of a brain injury claim and necessary treatments and treating team, in accord with ACOEM guidelines. ADA requests for accommodations at WCAB – Riverside have been repeatedly violated.

Treatments of chiropractic, acupuncture, neuro-optometry, neurology, functional neurology, speech therapy evaluation, on-line brain-training, EEG, and Brain MRI’s were medically necessary, as requested by multiple doctors, and in light of the medical necessity, and continuous bad-faith actions of employer and it’s insurance company and defense counsel, have been self-procured and more than approximately $23,500 in outstanding medical costs remain unreimbursed since 2012.

To date, authorized treatments have only included:

[All urgent medically necessary treatments have not been authorized, many denied by non-physicians, and in 2013, Corvel became involved in further denials, primarily not-authorized by their Orthopedic Surgeons denying further evaluations and treatment by specialists in Traumatic Brain Injury.  Distortions by QME/AME doctors, compounded by Defense pattern and practice of omission of medical records have further contributed to the lack of medically necessary treatments. The 38 page April 2014 evaluation by Forensic Neuropsychologist has been objected to by Defense, apparently in order to further delay treatment and cause further harm.] 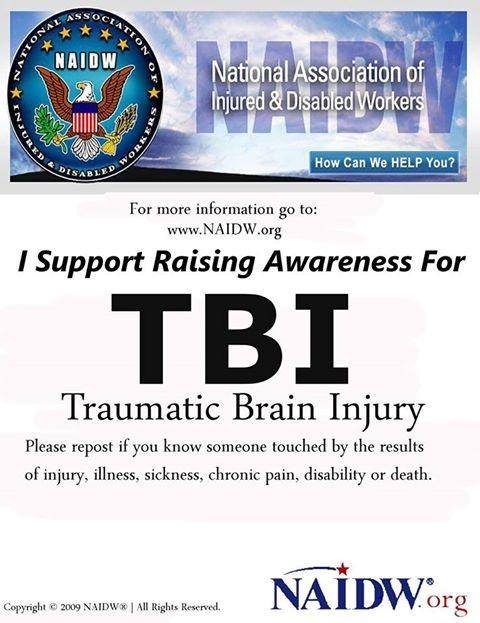 #1  Wyndham Worldwide and it’s agents neglected to provide medical treatment and proper evaluations since date of injury.  Managers at Wyndham Worldwide resort – WorldMark by Wyndham at Big Bear – were negligent and apparently untrained in proper handling of an industrial injury, particularly one including a head injury.  The failure to have transported the injured worker to the closest Emergency Room or advise injured worker to seek immediate medical treatment to avoid further injury is extreme negligence.

#2 Not given proper Workers Comp info on MPN Providers and List of Providers and 1st report insurance information was lacking, causing need for use of  employee CIGNA insurance through February 2012.

#3 Allowed to “drive self home” six hours after Wyndham managers saw her fall and lose consciousness.  Allowed her to continue working even though she complained immediately of confusion, pain in her head, back and neck and right ankle.

#5  Continuous negligence from lack of authorized treatments sent on a path of self-procured medical treatments (requested by multiple providers, ignored by carrier).  Out of pocket expenses for doctors, appointments, treatments and equipment needed for prognosis and ongoing care of brain injury and rehabilitation, and orthopedic injuries. 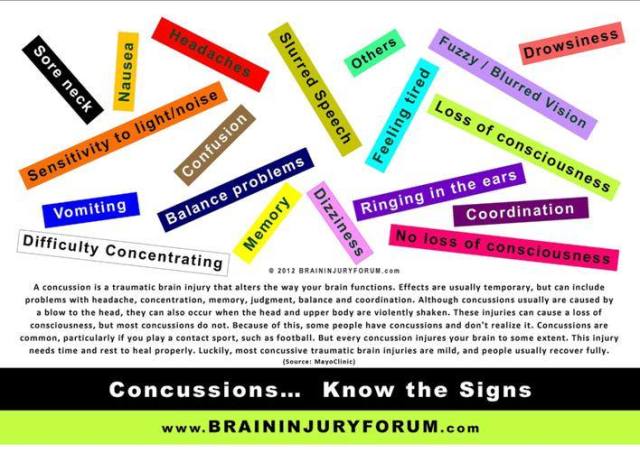 A) Monetary reimbursements of all medical mileage, treatments, and equipment dating back to January 2012, with maximum penalties.

**  All but three doctors (Kent, O’Brien & Zardouz) recommended further medically necessary treatments and evaluations for #TBI/Closed Head Injuries and orthopedic injuries; only a few chiropractic, a few clinical psychologists, and 6 physical therapy sessions were authorized the first two years.  The fight continues for medically necessary brain injury rehabilitation as well as for orthopedic injuries; clearly documented; Wyndham’s agents have continuously refused to and failed to authorize. 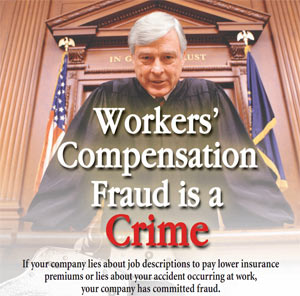 If the ‘injuries are so minimal’…. does it make sense that this injured worker would be off work for nearly 1,000 days… ‘for a headache and poor anger management skills when subject to intimidation, terrorism, and systematic bad faith and negligence?”

How can the defense continue to refuse to authorize medically necessary treatments, and how can the defense further allege that these injuries, exacerbated by refusal to deny medical treatments since date of injuries, were somehow ‘pre-existing’…..???  Mr. Reubens, any further questions??

“A WITNESSED SLIP AND FALL WITH LOSS OF CONSCIOUSNESS AT WORK….”

Forensic Psychiatrist:  “Treatment should only be provided industrially if the Finder-of-Fact finds some evidence of an industrially-related concussion injury.”  April 2013

STILL ON THE ‘REST AND WAIT PROGRAM’, WITH REQUESTS BY DEFENSE FOR YET ANOTHER ORTHOPEDIC EVALUATION, WITH A REQUEST FOR AN ORDER TO COMPEL….

in order for defense to ‘defend’ against the demand for medically necessary treatments, denied since date of injuries.  #USA SOS!!!