Years ago I asked an ol’ Sicilian Godfather type character, “Will you tell me, please, what is the secret to making lots of money?”  He said, “I will tell you.  It is very simple.  You find a need, then you fill it.”

What I have discovered about the majority of the members of the California Applicant Attorney’s Association membership is that they are generally burnt out, angry, disgruntled, overworked, screwed out of a decent wage by the chicanery of the Defense firms, and the end result is more casualties in the American Work Force. I’ve talked with plenty of you, from here to Northern California.  Most of you have been polite and cordial, but compassion is a rare quality in your ilk, isn’t it?

In my case, people say, ‘Oh.  She had 4 attorneys.  She must be hard to work with.’  BLAME THE VICTIM, THAT’S HOW YOU SLEEP AT NIGHT?

Because the majority of CAAA attorneys seem impotent in the Art of Negotiation, and seem to feel condemned to working for what probably figures out to be about $10.00 an hour?   The end result is badly managed work comp cases, workers that don’t get medical care, and as one of the four retained and dismissed in my case advised:

“Most of my clients don’t get medical care, they lose their jobs and their homes; it’s just how it is.”

That one attempted to coerce me to accept a premature settlement offer for a 1/9/12 brain injury for the ol’ $100,000, less legal fees, in November 2012, without benefit of having seen the specialist doctors recommended repeatedly, and denied not by UR but by the adjuster and the defense counsel.

He advised that, “Nobody will believe you have a brain injury. Work comp is a small community….”   I told him I was injured not stupid and that if nobody would believe it  was only because he didn’t do his job and get me to brain injury doctors, as repeatedly recommended by all the evaluating doctors I had been sent to.  How much money did the approximately 40 evaluating doctors plus CorVel & Maximus peeps make off my life so far?  How much do the defense attorneys make by continuously harming me?  And how about those adjusters and their fraud department that backs them up? 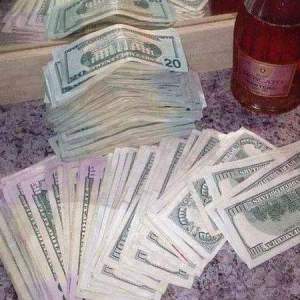 I’ve spent close to $50,000 on medical expenses trying to Survive WorkComp, and to clean up the legal messes CREATED BY YOUR MEMBERS, and have lost professional credentials and earning capacity, and I haven’t worked since 1/9/12.  Just because I can type doesn’t mean my brain injury healed on the rest and wait and wait and wait and wait CNA plan. 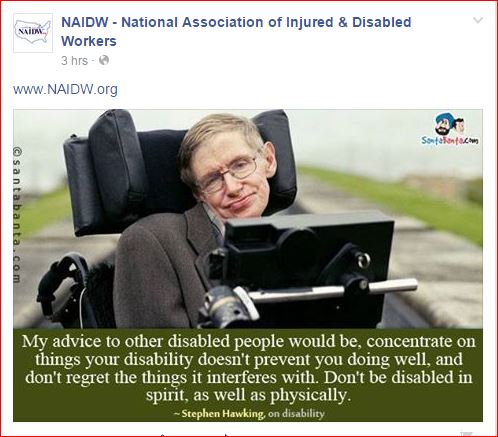 If CAAA members learned a bit about negotiations, they might find it reasonable to find alternatives to scavenger, bottom feeder type holds with liens when prior counsel has done nothing but harm the injured worker by doing a poor job, or no job at all.

One  attorney’s I retained, when I advised his office they were being retained because the defense has a nasty pattern and practice of omitting hundreds of pages of medical records with intent (and success) to deny medical care, I was assured I would not be sent to any evaluations until the matter was resolved.  Was that ever a whopper, committed by non-supervised “case manager’ practicing law without a license, another pattern similar to the QME/AME  doctor reports written not by the doctors, but by the non-medical staff.

Then, in writing, he battered me and accused me of desperately needing mental health care, and arrogantly stated that “There is no conspiracy to omit medical records in your case.”  He sent me to a very dubious AME eval, without medical records, and I am still paying for his incompetence.  By the way, it took nearly 8 hours in Court to get the Judge to order the Defense to send the omitted records to the two involved doctors (of the time) and to request a supplemental report.  Well, she sent them all right, not separately, not identified, but just in a new disorganized box and suggested the doctor find them and see if they made any difference in the conclusions. Then she did it again with the next QME, in December 2013. That’s 2 attorneys and highlights of their arrogance and incompetence.

The first one hardly counts, as it was not an attorney at all, it was a 60 second meet and greet with the attorney, then turned over to the Office Manager, who chanted, “There is no psych component to a WorkComp case” and promptly (next day) had me scheduled with an Orthopedic Surgeon on El Paseo in Palm Desert — FOR A BRAIN INJURY.   I got lost trying to find the front door, and entered through the employee entrance in the back — nobody but me found that odd.    The last one, rather than read the files I sent, and deal with the mess created by #3, merely agreed to yet another Orthopedic evaluation in late 2013.

Primary treating doctor has been an Orthopedic Surgeon (from 2/2013 through 12/2014 — I have had NO PTP since 12/2014—hardly matters, as there has been little-to-no care, just excessive evaluation upon evaluation, in true WorkComp Gravy Train fashion.

The office of #3, in an attempt to console me, said, “Oh, it makes no difference to you that he won’t release the lien  You get the same in any event.  It doesn’t matter if you have 1 or 5 or 10 attorneys, they divide up the 15%.”  I said, but you don’t understand, each of the 4 did more harm to me than the other, and I have a brain injury, and I can’t figure this crap out, there’s no integrity, fraud is NOT prosecuted, and the defense just makes stuff up and the WCAB supports it, and I can’t find competent counsel to represent me.

I asked one Judge to authorize me to pay someone hourly to help me. I can’t even find legal aid or a paralegal to help me. It seems that the WorkComp rackets have everything locked down.  There are even federally funded brain injury advocacy groups THAT REFUSE TO HELP AN AMERICAN WITH BRAIN INJURY IF THE INJURY HAPPENED AT WORK!

I have a brain injury plus it’s work comp.  The Information and Assistance office has clearly given me erroneous information SINCE FIRST MEETING IN 2012, and badgered me, abused me, violated ADA and civil rights,  and made it quite whose side she works for.  In Injured Worker circles, the experience of most I & A Officers is the same, so I don’t take it personally.  But, know that when you tell injured workers to see the I & A officer, you’re condemning them to more harm, and your credibility is further reduced.

WHAT IS A SOLUTION?

I tell you this because it’s identifying a need, that you can fill, and I can only scream about.  Your industry vendors are even afraid to work with/for an Injured Worker, in Pro Per.  Your industry doctors, playing hot shot, even return properly served medical records and threaten to sue an injured worker for daring to properly send such documents. Your vendors make it clear that they only take directions from “the adjuster” or  “The Defense”.

I even asked at WCAB for a list of possible attorneys in 2013.  I found one who answered his own phone.  Trouble is, he no longer works for injured workers.  He works for The Defense.  I got quiet and asked, “Tell me, why did you go to the Dark Side?”” He got quiet and said, “Because that’s where the money is.”

So, for starters, if you are approached by an injured worker with a brain injury, if you know nothing about brain injury, give them immediately a letter of non-engagement, and a referral if you can.

Then, set up some training sessions for your members for negotiations, and start with studies of Psychopaths…ie. DEFENSE AGAINST THE PSYCHOPATH.  It will help your members understand the Defense, and may reveal similar traits that may cause them to just head over to the Dark Side.

Watch it again, and tell your friends and neighbors.

Then, in each of your offices, set up an InProPer division, or something similar, with a Paralegal component, and an hourly fee, with a provision to take over the case when attorney liens are withdrawn.

DO SOMETHING TO HELP CLEAN UP THE MESS THAT YOUR INCOMPETENT COLLEAGUES CREATE, AND GET THEIR FANGS OUT OF THE LIENS THAT RESULT TO NOTHING FOR ANYBODY.

OH YEAH, OPEN YOUR FANCY CONFERENCES TO INJURED WORKERS, PARTICULARLY YOUR EXHIBIT HALLS.  IF YOU WON’T REPRESENT US, HELP US FIND THE RESOURCES TO REPRESENT OURSELVES.

Do some client follow up…… you may find gross dissatisfaction with your industry by injured workers and doctors.  You can blame injured workers all day long for your own shortcomings, but…in the end, you know the truth.

I will never forget the attorney who called me back around 8 o’clock one evening, screaming and swearing that he was working so late, and when I explained my case, to the best of my abilities, he called me “one of those work comp pariahs” and that he knew the defense counsel.  He assured me that ‘fraud’ was not a possibility; “incompetence, yes, but she is not capable of fraud”…. (That was his opinion; evidence points in the other direction.)

GIVE IT SOME THOUGHT…… IF YOU CAN’T HELP INJURED WORKERS, EITHER FIND SOME WAYS TO HELP THE IN PRO PER POPULATION, OR BE ASSURED, WE WILL DO ALL WE CAN TO GET YOU OUT OF THE EQUATIONS TOTALLY, and FIND WAYS TO HOLD YOU AND YOURS ACCOUNTABLE FOR THE HARM YOU CAUSE TO THE INJURED WORKER POPULATIONS IN CALIFORNIA, AND YOUR COLLEAGUES IN ALL STATES OF THE UNION.

CAN’T WE ALL JUST GET ALONG?

Look for the In Pro Per OBJECTION TO A FRIVOLOUS ORDER TO COMPEL ……COMING UP THIS WEEK…. 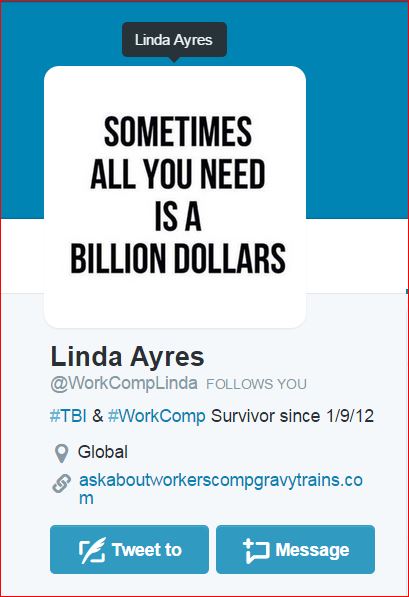