A Friend recently wrote this about the years I have been fighting #WorkCompsters:

“…But their 1st choice is to kick it down the road, and make your life miserable. They’ve already done that. You have quite a trail of deceit etc. to tell at court. The trouble with judges is that they come from the legal profession. I’m back to thinking that they don’t want to go to trial. Even if they get a positive determination ~ you can appeal. And they’d like you to go away….”

CHANGE OF HEARING DATE — AGAIN – CHURN BABY CHURN – ORDER TO COMPEL ENT EVAL FOR TBI!  D’OH PLUS DOCTOR SHOPPING FOR YET ANOTHER NEURO-PSYCH EVAL…. TILL YOU GET ONE TO AGREE WITH O’BRIEN?  LOL…..  He may have been off his meds, ya think?

Last year Fred suggested I come up with a proposal for you both. I researched and worked very hard on the calculations that I sent to both of you and the number I came up with was $1.3 million, in an acceptable structured settlement format, full complete release.

If I recall, you laughed and insisted on the same number Kim offered in Nov 2012—the standard cost of life for an injured worker in lieu of medical care ala Romano Trust vs Sedgwick—$100,000.

When Steve Chapman was involved with Dan Elliott to initiate conversations on settlement in early 2014, the number taken from my pre-SCRIPPS calculations was $700k.

What I have learned about my untreated brain injuries, risk of epilepsy, dementia and shortened life span, along with inability to work and devastating cognitive impairments…is not pretty. Your clients have effectively destroyed my life.

If there had been good faith efforts to help me get medical care and these were the results, that would be one sad story that I would have to just deal with. The abuse I have been subjected to that has caused permanent and irreparable harm is another story all together.

Make me an offer I can’t refuse.

I would imagine Steve Chapman could use his computers to do some “transparent calculations. I don’t like him and he doesn’t like me…but he may indeed do the right thing. Give him a call.
He won’t waste any more of his time time…He didn’t seem to think mediation would happen either.

I can be a reasonable woman, or not.

Tired of Fighting, but will fight till my last gasps, if necessary.

Due to the upcoming hearing, we canceled Dr. Smith’s examination date

RE: Change of hearing date

…..Your recollection and assessments are incorrect.

This is not the first incident of WCAB favoring Defense. It goes [back] to Kim [in December 2012]…..in apparent collusion with the I and A officer, giving the Judges incomplete info in order to set the Judges up, too. Tsk tsk tsk. What a web.

Its amazing what y’all can get away with, isn’t it?

WCAB denied my ADA accommodations request about this Order to Compel, then I screamed and they approved it, changed the date, then cancelled the hearing in your favor denying me due process…again. A pattern and practice of WCAB Riverside. My DOJ complaints are being updated to reflect this new act of ADA violations and request for further investigations. I have yet to be heard in over 3.5 years by a Judge re my right to medical care. [You know, that pesky little issue that’s part of the Labor Code?] Surely some decent political rep may find that at least –odd if not alarming.

[The selected mediator’s] failure to disclose her conflict of dates to commence mediation, in light of my clearly expressed timeline/deadline was the issue. Her act seems quite self-serving and un-neutral.  I apologize to you for believing I had found someone we could both work with. I understand her crowd is defense based but I believed she could be neutral. Apparently, I was wrong.

[You might be right, though.  I suppose I could have responded to the September 21, 2015 proposed  date the two of you agreed on after you wasted several more weeks since mediation was proposed this year, with a concise, ‘WHAT PART OF “BY OR BEFORE AUGUST 24, 2015  or maybe next year” WAS UNCLEAR?’

Was I unclear also that withdrawal of the Petition for Order to Compel and ENT evaluations for a TBI, along with excessive additional doctor shopping neuro-psych eval petition was necessary, or that the 8/25/15 date would stand for due process and my right to get in front of a Judge, and that mediation to participate in further 3D practices and file churning by Defense—is not my idea of NEUTRAL MEDIATION?

Lookie here what happens….  Defense Wins Again…at the expense of another Injured Worker. (It’s no wonder there’s just a small community of mediators, huh?  Just an arm of the Defense and WCAB?  Thanks Mediator and Judge Hill! )

Silly me, brain injury can make communication real tough, huh?  I did suggest that advance estimated PD or payment of lodging to facilitate continued participation at Coastline Acquired Brain Injury Program in Newport Beach, which commences August 24, 2015, be mediated, to no avail.] 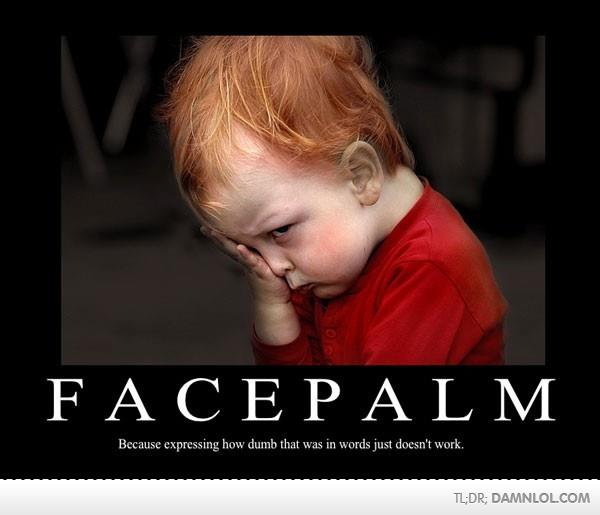 I’m in timeshare sales, I value vacations for others also. I despise peeps who live by harming others “profits before lives”…… Had she disclosed she could not meet the 8/24/15 deadline, you and I could have made a decision. Sounds like you and she decided without me. That’s not neutral.

There are two Judges that may be willing to mediate….I think it is Judge [  ] and the other one [the mediator] mentioned in Newport Beach.

I will put out another request for another mediator list via LinkedIn, describing the difficulties we are having find a neutral party. I found an association of mediators on LinkedIn.

I’ll just keep blogging..I want to help David find some decent people to acknowledge at the WorkComp Laude* event. No easy task and he shouldn’t have to do it alone.

Later,
Linda Ayres, In Pro Per

FYI– SOS sent out on LinkedIn yesterday — For What It’s Worth!

“…I am unable to locate a PTP for you. If you locate one, please let us know the name and address of the doctor and his/her willingness to accept you as a workers Compensation Patient…”     Please refer to Labor Code and Constitution of the United States of America… 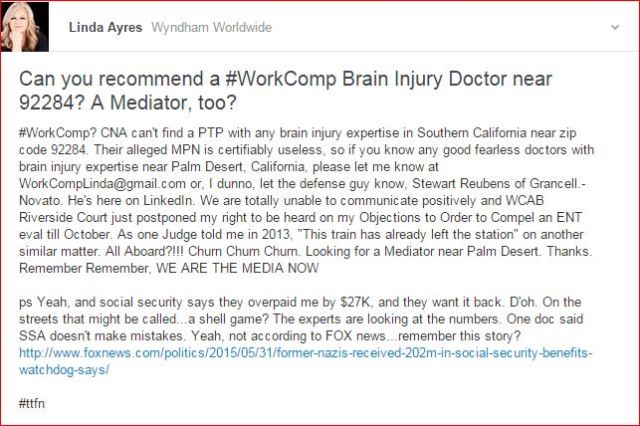 WorkCompLinda@gmail.com says:  FIND THE GOOD PEEPS IN WORKCOMP AND

NOMINATE THEM FOR THE FOR #WorkCompCentral 2015 Comp Laude Awards

MAKE A DIFFERENCE!  SAVE SOME LIVES!