Thank you for taking the time to nominate someone for a Comp Laude™ Award!

Please review the information you have provided:

Steven F. Chapman is a consummate professional who takes his work very seriously, overcomes known and unknown obstacles, and does his utmost to bring parties to the settlement table so that carriers can close the books on cases and injured workers can move on with their lives.

Steve has been intense, compassionate, harsh and kind in attempting settlement discussions in a very very complex case involving a traumatic brain injury. Steve was first discovered by the injured worker in question when she attended, as a guest of a Judge, the CAAA Winter 2014 (?) conference exhibit hall in Rancho Mirage California.

Why this nominee deserves a Comp Laude™ Award:

Steve Chapman’s expertise in structured settlements, and experience with brain injury complexities, make him the best possible structured settlement person for a worker with a brain injury — particularly when unrepresented, and attempting to maneuver the legal mazes for California Workers Compensation systems. Regardless of outcome of the end-of-the year scheduled mediation, he gets a High Five for getting mediation on calendar and perhaps at the Comp Laude Gala in December 2015, people may whisper, ‘he got them to the table and settled it…..she’s happy, they’re ok, and they even agreed to collaborate on a series of Injured Worker Self-Help ebooks to ensure that such tragedies never happen to a #Concussion / #TBI survivor in California again, or any Injured Worker in America” – or they may whisper, “Wow, he did a great job, but no settlement yet. Look out for her blogs coming up next…She’ll carry on till last gasps, so she says!” IMAGINE! 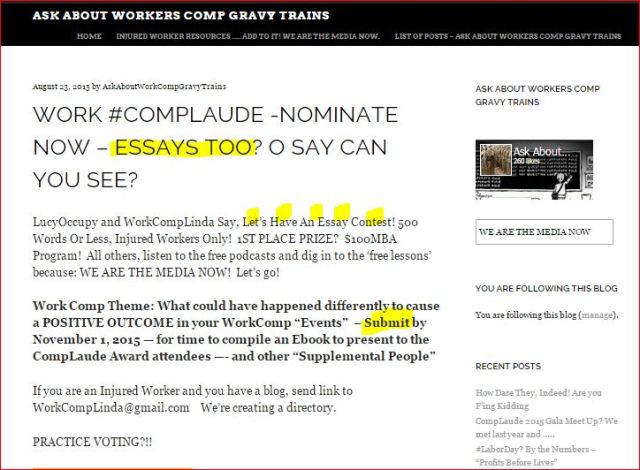