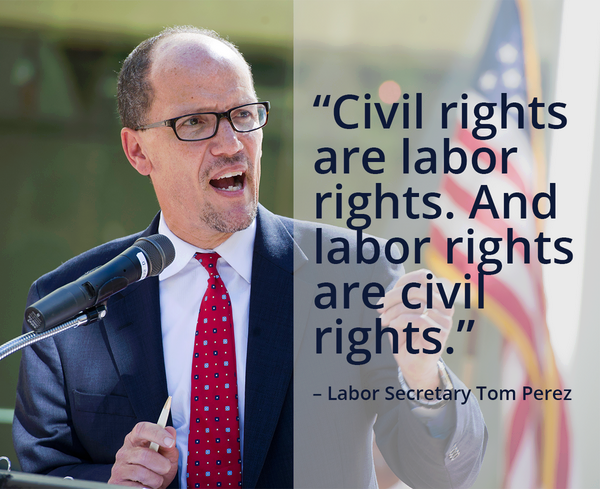 Remember Remember….. WE ARE THE MEDIA NOW

Hey America! Can We Talk about this Congressional Letter and #WorkComp and a Congressional Task Force on Workers Compensation Abuses and Torture of the American Working Classes?

DID YOU READ AND DISCUSS THE CONGRESSIONAL LETTER ON WORK COMP TO SECRETARY OF LABOR TOM PEREZ?

Below is an excerpt; click the link to go directly to the site.

Letter from Federal Lawmakers to Labor Department on Workers’ Comp –

Read and share, blog about it, as if lives depend on it.  The existing model of PROFITS BEFORE LIVES SEEMS TO BE A SWATH OF VIOLATIONS OF THE CONSTITUTION OF THE UNITED STATES OF AMERICA AND VARIOUS STATE CONSTITUTIONS.

Let’s hope for a WORKCOMP CONGRESSIONAL TASK FORCE that includes cooperation of not only Department of Labor, but also the Department of Justice, the Federal Bureau of Investigations and yes, the National Guard to Protect Injured Workers in the most offending, dangerous states until solutions are found.  Demand Domestic Torture Reports as a result of existing Workers Compensation practices.

Send a note of thanks to these Congress people who have gone on record before the America public of their concerns of the nation’s treatment of injured workers, forcing them into poverty and premature death.

Tell them your story too, and ask for an immediate TASK FORCE TO FURTHER INVESTIGATE AND PROSECUTE PERPETRATORS OF HARM TO INJURED AMERICAN WORKERS.

Tell your story to the people at ProPublica…..they have just hit the tip of the iceberg, wouldn’t you agree?  Start your own blog like mine, and be polite, but don’t sugar coat the atrocities.

Do you remember the “Women’s Revolution” and the “Civil Rights Movements” of the 60’s and 70’s?   Hey Kids, Yes, We Had a Revolution, just like John Lennon sang about.  We marched, we sang songs, we protested. We wrote letters.  Many of us then assimilated into main stream society.  Some continue to know WE HAVE A DREAM.  Others were and are total sell outs.

Draw your own conclusions, but be aware, the WarOnWorkers is real.

I made it more than 45 years without being harmed by WorkCompsters, and I have been fighting for my life nearly 4 years now, a rookie in the field of WorkComp Survivors.

Workers Compensation Insurance is a MEGA BILLION DOLLAR INDUSTRY, with apparently legislated fraud written on behalf of those shareholders and workers who profit the most.

The top ten insurance industry CEO’s make annual personal incomes in excess of $10 million… How do they do that? THINK THINK THINK.  See“Top 10 highest-paid CEOs at U.S. commercial insurance companies”and draw your own conclusions.

District Attorney offices, at least in California, are provided with millions of dollars each year to “fight fraud”….. How’s that working for California’s injured worker population so far?  You might have to wait 3 or 4 years for a call back!

WORKERS COMPENSATION IS NOT AN EMPLOYEE BENEFIT.

“It’s a Shell Game!”  Injured Workers are the Cash Cows for the industries. You don’t believe it?  Ask any Injured Worker Survivor, or any Doctor or Lawyer or other provider who has left the business, refusing to participate in the harm to injured workers for the profits of the few.

If you’re injured on the job, BE PREPARED TO FIGHT FOR YOUR LIFE AGAINST SOME VERY FORMIDABLE ENEMIES OF HUMANITY. There’s no “opt out” for the injured workers — it comes with a complete stripping of civil and human rights.  Thanks, Legislators!

If you have friends or loved ones being destroyed by the system, don’t let them fight alone.  Don’t let them go to doctor evaluations alone. Document everything. Congress may indeed instigate WorkCompGate investigations.

.
Study the video you can find on YouTube called DEFENSE AGAINST THE PSYCHOPATH.   It’s a documentary.  It will give you clues to survival.Today, you don’t have that privilege unless you want to go out as martyr, due to the radiation levels in our Country, too!
.
YOU HAVE THE INTERNET!  WE ARE THE MEDIA NOW.   ‘Teach your parents well….. THINK LOCALLY * ACT GLOBALLY #OccupyVirtually and #DodgeTheRads!’
We fought against things also like this:

Well! Some industry men have suggested that the tone of my blogs is too angry, and that nobody likes to deal with angry people, and that angry women seem to indicate a need to be ‘locked up in a psych ward’ — ‘medicated with mood elevators’ or have a ‘Court Appointed Conservator’ to make decisions to maneuver through the Workers Compensation Systems.[Doctors and non-retained attorneys have told me to KEEP screaming, somebody has to do it!]How about the neurologist who said ‘Women over the age of 35 are not entitled to medical care for brain injury’…. Or the forensic psych who suggested there was no concussion, just “poor anger management skills” and no medical treatment necessary.  What about the Judge who said, “Don’t use the word ‘fraud” in the Courthouse— that’s a legal term.” Are we seeing patterns here, too?   Do we hear “MCPs” squealing a bit?  Goodness, what a set of setbacks for Americans everywhere!

WHAT ABOUT “JUSTNESS”  Ask Kimberly Motley, Esq?  Her TedTalk on “How I defend the rule of law” is stellar!  It has almost a million views!

Have you seen and shared it? https://www.ted.com/talks/kimberley_motley_how_i_defend_the_rule_of_law?language=en

Helpful hints for communications about WorkersCompensation business model of PROFITS BEFORE LIVES can be found here:

Corporate bullshit as a communication method

A propaganda war of elite with rank-in-file folks

PS  Ask About “Your Radiation This Week”  “Have a wonderful radioactive weekend and remember to Dodge the Rads, it’s dangerous out there!”