Here is an updated questionnaire asking, 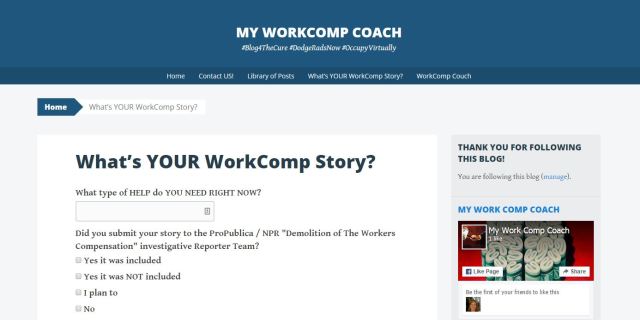 Let’s see and or hear your story whether you’re an injured worker, a WorkCompster, a blogger, or anybody in between those two categories?

If you have an iPhone or a Droid, video record your story!  JUST TELL IT LIKE IT IS!  #Blog4TheCure  #Vlog4TheCure because WE ARE THE MEDIA NOW!

Either use the story form or send an email to WorkCompLinda@gmail.com or Linda@MyWorkCompCoach.com   Response may be slow, but it will be sure!

Nobody seems to listen, therefore, THE ONLY HOPE FOR INJURED WORKERS IS TO DO WHATEVER IS NECESSARY TO GET OUT OF THE SYSTEM…… IMMEDIATELY!

Do you/did you have a lawyer who said things like, “Most all of my clients lose their jobs, their homes and more while waiting years for medical care”  or ‘Yes, we know the horror stories.  They are typical.’

Do you know doctors who said/say things like, ‘WorkComp stories are all the same. Different faces, names and body parts and diagnoses, but denied medical care and denied disability benefits and pain medications and horror stories prevail. That’s why I can no longer accept Injured Workers in my practice.  I can’t and I won’t.’

LET’S ORGANIZE TEAMS IN EVERY STATE OF THIRD PARTY MEDIATORS AND STRUCTURED SETTLEMENT PEEPS!   EACH ONE WARN ONE THOUSAND!

LET THEM DISCUSS THAT AT THE UPCOMING SECRET TRIBUNALS UNDER THE BANNER OF ‘NATIONAL DISCUSSIONS ON WORKCOMP!’

What type of HELP do YOU NEED RIGHT NOW?

A few more questions have been added, including:

“What type of HELP do YOU NEED RIGHT NOW?”

“Did you submit your story to the ProPublica / NPR “Demolition of The Workers Compensation” investigative Reporter Team?”

“Did Employer send a GET WELL CARD or wishes? More than Once?”

“Were doctors willing to be recorded in their evaluations?”

“Was fraud alleged or suspected…”

“What advice can you offer to help protect other Workers Who May be Injured in the Future?”

“What is the IDEAL OUTCOME FOR YOU TO MOVE ON WITH YOUR LIFE IS — (necessary medical, vocational rehab, other…a wish list!)”

PS   ACTION ITEM #2  Nominate these two blogs in the Injured Worker category on the March 2016 industry nomination event…?  The nomination link is below.

Ask About Workers Comp Gravy Trains – reach of over 30,000 since Summer 2013 – and ‘the parties reached resolution, subject to confidentiality agreement’

“I BLOG, THEREFORE I AM A WORKCOMP SURVIVOR.  BE ONE, TOO!”

A few injured workers have blogs, some have video channels, others have books and others are simply dying quietly waiting for medical care, disability benefits, and medications for pain and suffering caused by botched medical procedures.

Many Injured Workers have expressed devastating and incapacitating fear of retaliation for telling their stories.  Therefore, we are rethinking compilation strategies and may tell the collected stories anonymously, first, leaving doors open for further input, to protect the victims of Amercia’s Workers Compensation systems.

Third party stories told by WorkComp industry workers, also afforded anonymity, would be welcome, providing another degree of protection for victimized injured workers.  CAN YOU HELP?  WILL YOU HELP?  IF NOT YOU, THEN WHO? IF NOT NOW, THEN WHEN?

If our friends abroad want their stories told in America, we welcome you.  Your Struggle is Our Struggle and as we #OccupyWorkComp, Virtually, WE SHALL OVERCOME!

It looks like the “Industry Experts” are busy busy busy with more conventions and more studies to the ‘puzzling, baffling, mysterious and perplexing’ concerns about why Injured Workers in the United States of America are being denied medical care and benefits, why they are becoming permanently disabled in increasing numbers, why costs continue to shift away from Insurance Carriers.  The only lessons they are probably studying is damage control from the 2015 series, FROM INSULT TO INJURY about The Demolition of Workers Compensation!  Google it and review the letter from Congress the investigative reported apparently incited!  Go ProPublica and NPR!

While ‘medical costs’ allegedly continue to increase, these “costs” are not typically for medical treatment, but merely for medical evaluations with intent to continue to deny medical care ‘by any means necessary.’  Many injured workers see it as a simply complex ‘money laundering scheme’ that should be of interest to the Department of Justice peeps.  Many injured workers scream RICO RICO RICO…

“GET OUT OF THE SYSTEM BY ANY MEANS NECESSARY TO SAVE YOUR LIFE!”

These problems are not unique to Americans.  The Canadians are experiencing the same issues, with some of the same carriers and like-minded legislators and vendors.  The Australians have the same issues.

A recent industry article mentioned the ‘value’ of surveillance of Injured Workers. Oh my, tell that to Mayor Betsy’s Police Force in Fort Worth….remember the lady cop who was none too happy about being under surveillance for filing a work comp claim?  Has anyone seen an update on the seriously injured cop in ICU that had a nasty visit from ‘Nurse Ratchet’ of ‘Corvel’ that made national headlines?

On the issues of surveillance, video recordings of medical evaluations can save lives and careers.  Remember the win for the First Amendment in the Dr. Rosalind Griffin perjury allegations?  A brave and courageous personal injury attorney went to bat for the Constitution and for his client with a brain injury in Michigan!  Steven Gursten, an American Hero!

Google it too!  Here’s one criminal defense blog on the typical IME sequence of events (and yes, video recordings apparently protected the innocent!)

Quite common and reprehensible, wouldn’t you agree?

How close is YOUR home to a Nuclear Power Plant… see the CNN partial list here!

“Your Radiation This Week” – America!